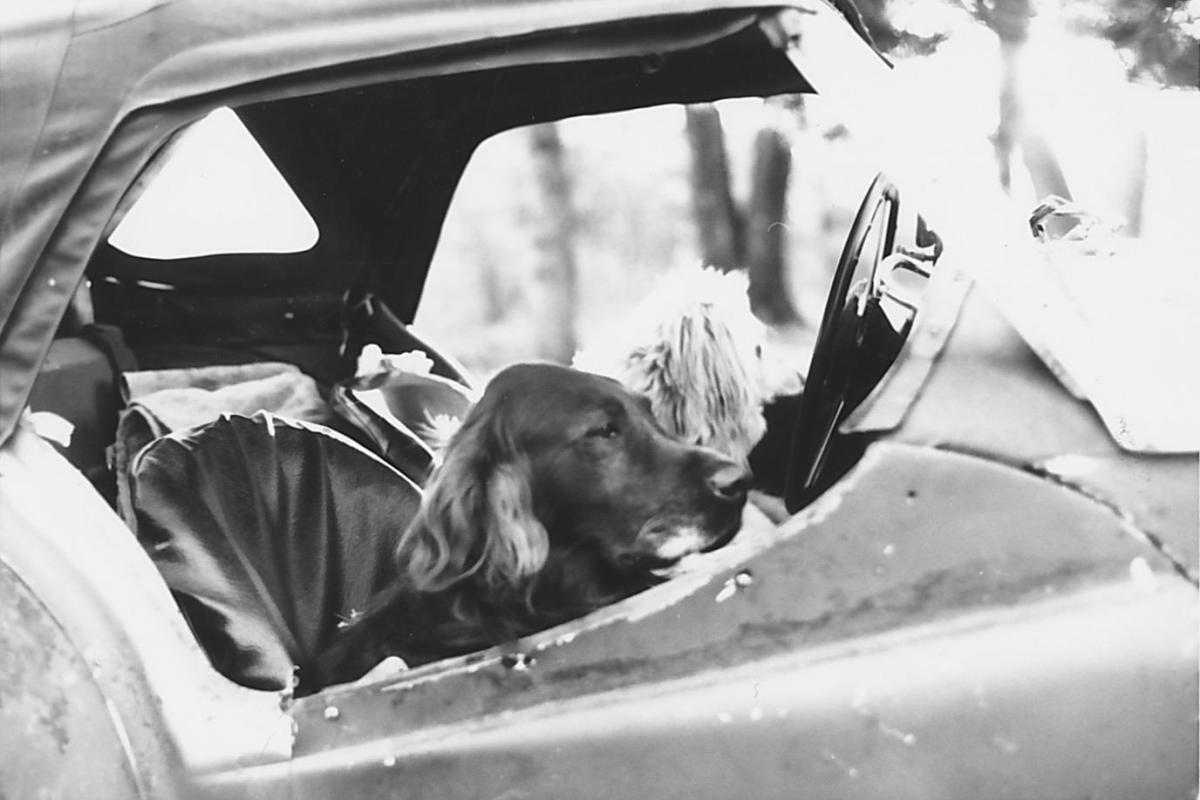 When I opened my eyes to the bright winter sun that morning on our terrace in northern Bavaria, Erin was gone.

The old gray muzzle lay on my lap, his last breath, a sort of sigh, caught in his chest. There wasn’t so much as a slight breeze, and my own breath, hanging in the air, partially clouded my glasses. This was the first breath I’d taken in 17 years without my constant companion and fellow traveler, Erin Alex of O’Lannon.

“He had a very strong heart,” said the vet as she packed her bag and made her way out. I listened to the door close and to her footsteps down the concrete walkway. I heard her car door close, the engine start, and the car drive off. Erin was now completely limp, the tension of fighting death blissfully gone.

Yes, he had a strong heart, a true Irish Setter heart, but in the end that was all he had left. He was a big dog for an Irish setter, from field trial stock, and he weighed about 85 pounds. But the last several weeks had seen a dramatic loss of strength in his hind quarters until there was little feeling or movement left. I was not giving up, and I fed him a vitamin packed mixture of food he loved, meat and cooked carrots, then carried him outside and held him up while he relieved himself. We got along like this, and he was giving it his valiant best. I brought him to the vet for shots and therapy. It helped for a while – he seemed to recover.  Then he relapsed.

When he stopped eating and no longer had the will to pull himself up on his front legs to greet me, the time was at hand to make that decision every dog lover dreads. Erin had taken to barking softly, until I sat on the floor and stroked his head, which laid in my lap. His message to me was clear: “I must go now.”  There would be no more walks in the forest behind our house. Our world travels would end here, in this tiny Bavarian village of Schraudenbach, just north of Würzburg. He needed to shuffle off this mortal coil, to be released, to die, to sleep: perchance to dream for an eternity of chasing birds, running beaches, and swimming in cool water. I’d bury him next to an ancient Hun burial ground we’d discovered on one of our long walks.

I hoped he might die naturally, just drift off from sleep as he went from my hands to those eternal hands of lasting peace as nature took its course. But the natural world has a most cruel and incomplete aspect that almost never lets that happen. We must play God. We cannot let our animal friends suffer.

I called the vet. We had rehearsed this the last time I brought Erin to her office a week before. She’d provided a very strong sedative to give him early on his last morning. When she arrived, Erin and I were sitting on a warm blanket in the sun on the terrace. He was sleeping soundly, the drug his last respite from pain and from the frustration of not being able to enjoy life as a dog. A quick, painless injection and he passed gently, so gently, into that good night. Old age did not burn and rave at close of that day, and there was no rage against the dying of the light. I was grateful for that.

Now I was alone, without my cherished friend and traveling buddy, for the first time in almost two decades, which at that time was about half my life.  I have not stopped thinking of Erin all these years, and now it’s time to tell the story of my travels with Erin.

Certainly it wasn’t the best time, working nights tending bar to support myself while I attended university. But would it ever be? I grew up on a farm, surrounded by animals, and I always had a dog. Now, years later on my own, I missed those animals, and I really missed my dogs.

“What kind of dog are you going to get?”

An Irish Setter. I’d spent a winter ski bumming at Aspen, and my first job was working part-time as an attendant at Aspen Airport to pay for my meager lodging and a three-mountain ski pass. One clear mountain day, a family traveling with their Irish setter asked me to mind him while they got ticketed, checked in and were ready to board. I immediately fell in love with this most handsome Irish gentleman, so dignified, yet warm and friendly. Within that 15 minutes, we became best friends. Then, it was time to go. He had a plane to catch with his family, and I had a plane to unload, and more passengers to assist. But his image and his demeanor persisted in my thoughts.

Though I’d grown up with herding dogs, I was about to get an entirely different kind of dog. I located a Wisconsin breeder of field stock Setters and picked my puppy, eight weeks old, registered Erin Alex of O’Lannon. We could not imagine that the next dozen and a half years would bring us to cities, countries and continents unknown. Little did I know that at the end of his life I’d bury him in a Bavarian forest, his grave surrounded by Hun burial mounds. No one would know such things, nor want to.

He got used to travel right away. During the first car ride we took in my girlfriend’s father’s new car, he vomited, peed, and pooped all at the same time on the back seat. Having gotten that out of the way, he never did any of those things in a car or a travel kennel again. But what a way to start things out with Theresa’s dad, my future father-in-law!

We traveled. Traveled and moved, moved and traveled. I wanted to live everywhere. We lived in the city, in the country, and out of the back of cars and vans. We rested our traveling bones in motels, hotels, and tents in the forest. Colorado mountain streams, north country Wisconsin lakes and woods, Pacific and Atlantic Ocean shores, and African deserts became familiar territory. Though Erin took to every environment and made it his home, he loved the Wisconsin family farm more than any other place. There were fields to race through, nose to the ground, with swamps and ponds to splash and swim. He cut his foot wide open once on a piece of glass submerged in a smelly bog. I wrapped his foot in my shirt and drove 90 mph to the nearest vet. He was bleeding so badly that there was no time to put him under for surgery. I held him down while the vet sewed him up. It was messy. That slowed him down for couple days, but he bounced right back.

We decided to go to Europe. I’d been reading the expat Lost Generation writers:  Henry Miller, Ernest Hemingway, Anais Nin, John Dos Passos, Djuna Barnes, F. Scott Fitzgerald, and Gertrude Stein. I dreamed of renting a room above a boîte in the Quartier Latin of Paris, drinking wine on the terrasse of an outdoor café and discussing philosophy with Jean-Paul Sartre (who was still alive at the time), or settling into a well-worn couch to browse a beat up copy of Rimbaud’s’ “Une Saison en Enfer” at Sylvia Beach’s bookstore, Shakespeare and Company. You have to start somewhere!  But I never did meet Sartre.

Oh, and Erin was coming along. We were going to travel until our money ran out, and I wasn’t sure when we’d be returning to the America, so Erin would be with us. We went to a travel agency around the University of Minnesota, and the travel agent scared the hell out of me with stories about the possible misfortunes awaiting dogs traveling in the belly of an airplane. Erin was going with us, but not like that.

While looking around the agency, I picked up a brochure about transatlantic ship crossings. There was the answer!  Nine days crossing on an Italian luxury ocean liner, all meals included. Dogs were welcome, there were kennels on board, and to top it off, there was a “student price” that was even less expensive than air fare. We pulled out our eternal “International Student Identification Cards,” booked passage, and began preparations to board the SS Michelangelo in New York City a few months later.

5 thoughts on “Travels With Erin”